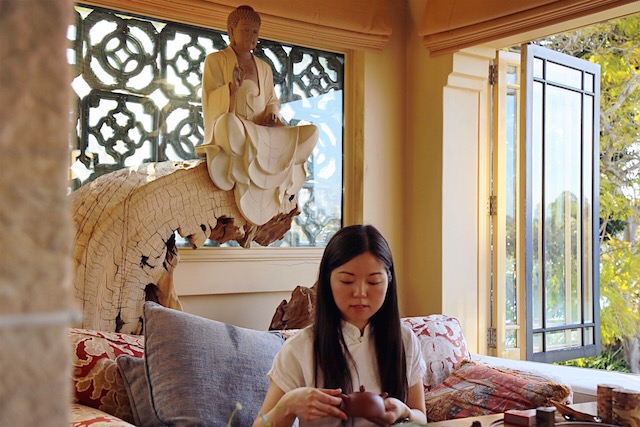 Tea is universally appreciated, whether with milk and sugar in the UK, with mint leaves in Morocco, with yak’s milk and salt in Tibet, with sugar and ice in the United States, with tapioca pearls in Taiwan, with spices or herbs like chai in India or masala in south Asia, or with ceremonial elegance in China.

But which country has the longest standing tea tradition? According to legend, the mythical forefather of the Yan and Yellow dynasties Chinese Emperor Shennong from 2737 BC was born with a crystal stomach. The story goes that he would observe his visceral organs reacting to different herbs so that he could distinguish the functions of each plant. Upon encountering toxins, he depended on tea for detoxification and this is the earliest record of tea in Chinese civilisation. Emperor Shannong is also credited for teaching agricultural methods, inventing farming tools, and discovering cereal and herbal medicines.

Today, tea is considered one of the seven Chinese necessities (necessi-teas!), and is drunk throughout the day. In 2010, Chinese people consumed 1.1 billion kilograms of tea, while British people drank 130 million kilograms. There are over 800 varieties of tea in China and, not surprisingly for a country so ‘consumed’ with tea, the rituals around drinking it have taken on special meaning.

“When the tea master arrived, adorned in her traditional Chinese clothing, we took our seats eagerly, waiting in anticipation. The tea master first explained the various utensils she would use. She allowed us to smell the first tea before she began the process of brewing. One of the first things you realise during the ceremony is how symbolic everything is, from the process of brewing, how you hold the cup, to the way the tea master uses the utensils. It’s these details that make this whole process special.” [ebeijing]

Chinese tea culture is all about setting the scene, aesthetics and the senses — the subtleties of flavour and aroma, the depth of colour and transparency of the tea, taking part in ceremony. A simple but memorable experience, it captures the imagination and leaves a lasting impression.

At Macquarie, you can take a course in Chinese Tea Appreciation - Introduction, or Chinese Tea Culture and Tea Appreciation. You will be transported back to the story of tea, where it is from, how it is picked and processed and the uniqueness of each tea — white, yellow, oolong, black, pure tea. You’ll learn about its health benefits, how best to store it, different brewing methods, how to judge tea, how to set up a traditional tea table, and which tea wares are best.

When you take part in a tea ceremony, you will see that everything has meaning — the way the tea is prepared, the fluidity of movement when it is served, and the way it is delivered to you.

“In my three hour course, people have a lovely cultural experience and learn so much more about their passion — tea,” says Macquarie trainer Hailan Lin, who also owns her own tea studio.